There are a couple of solid reasons that help in the selection process, in the case of the UK.

The key point here is to note that some of the top universities in the world, such as Cambridge, Oxford, Leeds, Imperial, and more are situated in the UK. These universities have a history of producing some great minds.

UK degrees are accepted worldwide, both by academics and employers. Institutions in the UK have an enthralling repute for quality education. It has a history of investing in world-class leaders such as Benazir Bhutto, Mahatma Gandhi, Desmond Tutu, and many more. The fun fact here is that all of these great people were non-immigrants. 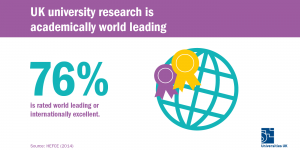 Even though Brexit has impaired the research in the UK, as reported by Nature. However, the UK remains one of the world’s finest in producing first-class research in the natural sciences. Maintaining its 4th position among 50 countries. With only 0.9% of the world’s population, it produced 15.2% of the highly cited articles in the year 2015.

Global collaborations and partnerships in higher education institutions contribute magnanimously to this excellence research base. In the year 2017-18 UK was the 3rd largest producer of research publications after the US and China.

The UK government has put out research and innovation intrinsically as a part of their industrial stratagem. The goal is to make the UK the most innovative country in the world, by increasing R&D to 2.4% of GDP by 2027.

The universities in the UK are known for their wide range of degree programs. No matter what subject it is, there are numerous choices one has. You have access to around 2941 degree programs while applying; graduate and post-graduate both.

So no matter, what subject interests you will certainly find something that meets your suitability. You will most likely fumble across degrees you haven’t heard about before!

The United Kingdom without a doubt has a rich culture asset, increased immigration over the years has led to this diversification. Every year around 4 million international students travel to the UK for their studies. Apart from this the usual immigrants who come for work and citizenship bringing along their heritage and history.

The UK is an illustrious place to live and study, constituting of England, Scotland, Northern Ireland, and wales. Each country has discrete regions, each offering large cosmopolitan cities, towns, and countryside villages. All of these contributions in a multicultural society, with a rich multiplicity of cultures, languages, and faiths.

You will find extensively wide-ranging cuisine, strong transport connections, music festivals, and international sporting championships. What you end up valuing the most, maybe even more than your course is the friends you can make for life.

This diffusion of varied cultures has created a jovial persona of the country. People traveling in and outcome across so much learning and exposure. International students learn to adapt to this culture, soaking in all the instruments of each culture.

This kind of face-off can help them unlearn and relearn a lot of human management skills that can and will help them in their jobs and forthcoming journey. Education is not about just going to a certain institution, it involves a lot of digging in and learning new things. The purpose of going abroad is to put yourself under that kind of exposure and challenge yourself.

5. The largest library in the world

The national library of the UK is the British Library. The largest library in the world by the number of items cataloged.  It has more than 170 million items in its catalog.

It is situated near to King Cross Train station; also home to the world-famous reading room.

People come here for long study sessions and reading, as it is very peaceful. So If you are into research or looking for a specific reading material you can find it here.

If traveling to Europe is on your bucket list, then studying in the UK is the best call. The UK connects you with Europe in the most convenient way possible. You can utilize local transport and get discounts on your student cards. The English Channel tunnel can take you right into mainland Europe within a day. You can reach most areas of Europe from the UK within a few hours of train or direct flight. The cost of airline tickets is also not very high.

If you are studying somewhere in London or Manchester you can easily manage to go on a weekend trip to Italy, Rome, Milan, Venice, and other cities. This tourism spree won’t cost you a fortune and you will be able to tick the maximum number of destinations off your bucket list.

In today’s age, the job market has a lot of competition. It’s all about the survival of the fittest. To be able to survive you must be equipped with the right skill-set.  And what is the best way to do so?

To be able to afford a top university, and cover all the other living expenses entirely on your own can be an impossible task. However, knowing your financial struggles and trying to lessen the burden of your parents or financial sponsor can be one way to learn all the skills before your placement.

No matter, which university you choose to study in the UK it will cost you quite a lot. But the good thing is unlike other study destinations the government of the UK allows students to work while studying. During an academic year, one can work up to 20 hours per week. And once the academic year is off you can seek a full-time job. A British degree will improve your employability and also the part-time job will develop a certain skill-set for the job market.